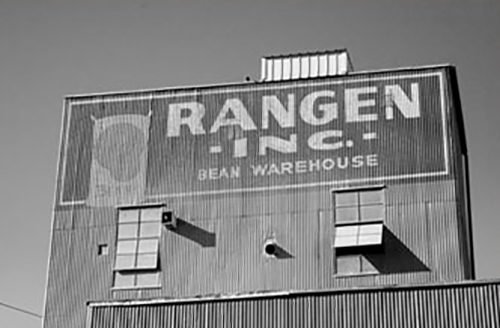 A Look at Rangen’s Beginnings

A simple effective philosophy, “If you give service, you will have business”, has served as the cornerstone for the development of the divisions of Rangen, Inc. that were initiated as the expanding agricultural industry of Idaho matured.

Theodor Rangen, the founder of Rangen, Inc., began to build his company around the needs of the Idaho farmer.  This reaction to the need to serve the people by an independent company has developed from the manufacture and delivery of feed and ice in the 1920’s to a center for agricultural and aquaculture products and services.

The ice plant, built in 1925, was the first of the corporation’s buildings.  Initially, the ice plant produced blocks of ice to be delivered by teams of horses for “ice boxes”.  Later, the plant produced ice for use in transporting trout for the Magic Valley’s trout producers.  In terms of buildings, the first structure of 84’X100’ has grown into several plants in Buhl.  In addition, the company owns and operates a research center, a 70-acre research hatchery facility, bean receiving stations in Twin Falls, Filer, Buhl, Kimberly, Hansen, and Berger Idaho, and an aquaculture feed mill in Angleton, Texas.

The Aquaculture Division is divided into three different operating units including the Feed Manufacturing Plants, Research, and Research Hatchery.  The Aquaculture Division was created in 1950 when Rangen Inc. pioneered the development of a nutritionally complete commercial dry diet formulation for trout that was welcomed by a growing commercial trout industry and developing state and federal hatchery programs in the United States.  Rangen was one of the first sources of reliable trout and salmon feeds and remains one of the most extensive manufacturers of nutritionally effective aquaculture feeds.   In the late 1980’s, Rangen introduced the first extruded floating trout feeds to the trout industry.  These diets have become the industry standard due to their efficiency, pellet integrity, and feed management benefits.

The Rangen Research Hatchery was built in 1963 near Hagerman, Idaho for the purpose of testing experimental feed diets on a production basis.  Feed formula are tested and retested to assure optimum feed conversion, low mortality, high health, optimum quality, excellent growth and economy in the raising of trout.  The trout that is produced is sold to trout processors in the Magic Valley area.

Rangen Research was established in 1976 for the purpose of providing confidential diagnosis of disease problems of fish for private, state and federal aquaculture operations.  This division has also developed an in-house research and development program to develop and market quality products needed in aquaculture and other animal industries.  Products developed at Rangen Research include oral fish vaccines, a disease diagnostic test kit, and most notably, a stabilized form of vitamin C (Stay-C)  which was developed in collaboration with Zeigler and Kansas State University and is now marketed world-wide. Rangen Research’s other services include consultation, training, fish health inspection, and certification for the aquaculture industry.  Rangen Research is situated at the Research Hatchery near Hagerman, Idaho.

Rangen’s primary business is the production and marketing of specialized high quality aquaculture feeds including trout, salmon, and shrimp feed, and premixes under the internationally recognized “Rangen” label. Rangen’s Aquaculture Division has experienced strong growth, largely as a result of the Company’s ready access to a substantial and well developed trout farming industry which utilizes pure water emerging from local canyon aquifers which flow into the Snake River. The unique natural resources are also conducive to nutritional research which Rangen applies to species such as salmon, catfish, tilapia, and shrimp. With leading research information, Rangen markets high end aquaculture feeds which are processed and positioned to improve the economics of fish farming through increased feed conversion ratios and better fish health. Management believes the Company is in the forefront of an aquaculture feed technology transformation, a process which has already occurred in larger and older livestock feed industries such as poultry, pork and beef. Management believes Rangen is the second largest trout and salmon feed producer in the U.S. and the largest shrimp feed producer in the U.S.

Rangen’s General Feeds Division provides a variety of nutritionally balanced feeds for livestock, farm animals and pets in a market area of seven western states and British Columbia. Rangen produces a high quality custom formulated feed, which is perceived by many growers in the dairy industry as a premium, “value added” product. The general feed market area served by Rangen has experienced significant growth due to the growth in Idaho’s dairy industry, particularly in the Magic Valley area of Idaho which surrounds Buhl, Idaho. In 2010, Idaho was ranked as the third largest milk producing state in the U.S., and the second largest in the western U.S.

Through its Commodities Division, the Company also processes and stores dry edible bean varieties such as pinto, pink, red, black turtle and great northern beans, as well as corn and wheat at facilities in Twin Falls, Filer, Hansen, Buhl, Berger, and Kimberly, Idaho. The company’s dry bean business is currently concentrated on the pinto bean market, selling pinto beans under the “Rangen” name. The Company processes Idaho beans, which are considered in the food industry to be among the finest in the world due to their superior taste, texture and overall quality.

As the Company develops its strategy for growth during the next ten years, management has focused upon two important definitions of the aquaculture feed market. First, according to Company management, the feed market is quality driven rather than price driven, and second, the feed market is becoming more sensitive to the maximum utility of genetic growth characteristics in fish, which can be induced by proper feed. As farmers prepare their stock for market, the rate of growth for each pound of feed consumed is used as an indicator of the effectiveness of feed, known in the industry as the conversion rate. For example, for each pound a trout gains during the grow out period, 1.1 pounds of Rangen feed must be consumed, for a conversion rate of 1.1 to 1. Competitor feeds have a conversion ratio of 1.5 to 1; in other words, 1.5 pounds of feed must be consumed to gain one pound of weight. The Rangen strategy has been to develop feed with the best conversion rate nutritionally possible, while maintaining a premium quality feed product.

As the second largest producer of trout and salmon feed, and the largest producer of shrimp feed in the U.S., Rangen has developed a reputation as a premium producer of quality feeds. During the early days of the aquaculture industry, farmers often fed their fish either extremely low quality product or scrap. The poor quality of feed had negative consequences, including disease, water quality problems and low quality end product. Management believes the Company has played a major role in the development of the industry, through research and development of feeds which not only increase the quality of the end product, but a decrease in mortality and disease levels. As the aquaculture industry has grown, the Company has expanded its base of business to other species and geographic areas of the world.

In 1993, Rangen completed construction of a $7.3 million specialty aquaculture feed production facility in Angleton, Texas. This area was selected to take advantage of its proximity to the rapidly growing aquaculture industry in Texas, Latin America and Mexico. In addition, Texas offers ideal water acreage for catfish production and several temperature related advantages over well established catfish farming operations in southern states such as Mississippi and Alabama. The water resources in southern Texas have also attracted substantial investment in shrimp farming operations requiring unique feed production, which the Rangen facility was also designed to serve. Rangen expanded the Angleton, Texas facility in 2008 with the addition of a completely separate manufacturing extrusion line and supporting equipment.

The Company’s General Feed Division strategy has emphasized slow but steady growth of the division and maintaining a strong market presence within Idaho and the Northwestern region of the U.S. The geographic distribution of the Company’s general feed market area remains regional due to freight cost and increased competition outside the region. The General Feeds Division has maintained steady growth through the manufacture of a cost-efficient, high quality general feed product and by capitalizing on the growth of the dairy industry in and around the state of Idaho. The majority of this growth has been concentrated in the Magic Valley of Idaho, located near the Company’s productions facilities. However, recent trends have expanded the core market beyond Idaho’s borders to the west and south.

The Company’s Commodities Division has developed a market presence for its pinto beans in the western U.S., particularly in California, where the beans are sold direct to restaurants and foodservice communities, and also to food processors. There, the bean is further processed into a high quality, canned, refried bean. The Commodities Division’s involvement in the corn and wheat market is in large part for the exclusive use of Rangen’s General Feeds and Aquaculture Divisions. The Commodities Division’s ability to purchase and store large quantities of corn and wheat not only enhances the overall margins for the Company’s General Feeds and Aquaculture Divisions, but also enhances the Company’s ability to attract new Idaho-based growers by providing a single outlet for many of their products.